When I first visited Northern Virginia twenty years ago, I noticed the name Sugarland all over a certain area and wondered what kind of name "Sugarland Run" could be. I just found out the full story behind the name, and the answer takes us deep into Nova's topography, ecology, and history.

It goes back to 1692 and the earliest English exploration of the Herndon-Reston area in Northern Virginia. There's a creek there called Sugarland Run, a tributary of the Potomac, which rises on the border between Herndon and Reston and flows ten miles north to its mouth in Algonkian Regional Park, a few miles above Great Falls. ("Run" is a historical word for creek in Potomac-area place names. See below for more on Sugarland Run.)

The Great Falls of the Potomac mark the Fall Line, the edge of the higher, more erosion-resistant crystalline rocks of the Piedmont upland, the plateau above which the Blue Ridge rises. The Piedmont's waters cascade over the escarpment at its eastern edge, down to the alluvial lowlands of the coastal plain, the Tidewater region on the coast of Chesapeake Bay. This topography is significant for how the name Sugarland came to be!
A Journiall of our Ranging, Given by me, David Strahane, Lieut. of the Rangers of Pottomack.
...
Sept. the 22d, 1692:  We Ranged due North till we came to a great Run that made into the suggar land, & we marcht down it about 6 miles & ther we lay that night.

Sept. the 23d:  We marcht to the suggar land and the 24th we Ranged about to see if we could find any trace of Indians but we could not see any fresh sign. The 26th marcht to Capt. Masone's & there I dismissed my men till the next march.
In those days, the inhabitants of the sugar land were the Manahoac tribe of Indians. The only English settlements in the north of Virginia were down in the Northern Neck, where the Potomac estuary flows into the Chesapeake. Capt. Masone, grandfather to the famous George Mason who helped write the Bill of Rights, was the farthest north Virginian settler in 1692, living where the Occoquan River flows into the Potomac estuary. His associate, Lieut. Strahane, starting from nearby Accotink Creek, explored due north to where Reston would one day be: the "suggar land." The phrase has taken on a magical ring for me, for what it tells of Mother Earth. The first taste of Upland, of the North American interior, for 17th-century English people.
Taking their Range through a piece of low Ground about Forty Miles above the inhabited parts of Patowmeck River and resting themselves in the Woods . . . observed an inspissate [thickened by evaporation] Juice, like Molasses, distilling from the tree.The Heat of the Sun had candied some of this juice, which gave the Men a Curiosity to taste it. They found it Sweet and by this process of Nature learn'd to improve it into Sugar. But these Trees growing so far above the Christian inhabitants, it hath not yet been tried whether for Quantity or Quality it may be worth while to cultivate this Discovery . . . yet it hath been known among the Indians longer than any now living can remember.
The above passage could mean either the Englishmen discovered maple syrup on their own, or it was the gift of hospitable Indians. I consider the latter reading far more likely: The Manahoac or the Doeg tribe offered them their first taste and taught them the process of maple sugaring. And their gifting of this wonder of the earth to their visitors was edited out of the story. The Indians having given so much to European immigrants, the means to survive in this land most of all, it was particularly ungracious—it was downright churlish— to twist the phrase "Indian giver" into a derogatory term. In truth, the phrase brings honor to the Native Americans.

So this explains how the Herndon-Reston area was dubbed Sugarland: the habitat of the sugar maple (Acer saccharum) begins up above the falls, on the Piedmont plateau. The tree likes upland woods and level areas—which perfectly describes the Virginia Piedmont. Therefore, the Northern Virginia Piedmont, where the upland is closer to the coast, was the natural place for the English to learn of maple syrup for the first time.

In the Lenape language, an Algonquian language closely related to the Doeg Algonquian dialects once spoken in Northern Virginia, the word for sugar maple is ansikemes; another name for it is ahsenam-enshi: literally, 'food-bearing tree of the rocks'. Likewise in English the sugar maple is also known as rock maple.
This morning, I made a Lenape breakfast—sapan (cornmeal mush) cooked with dried blueberries, topped with maple syrup and maple sugar. For Algonquian peoples of the interior uplands, like my Lenape ancestors up on the Allegheny Plateau, salt was usually hard to come by. But they had plenty of sugar. So they seasoned their food with sugar instead of salt!

How I love that glorious fall sugar maple foliage! 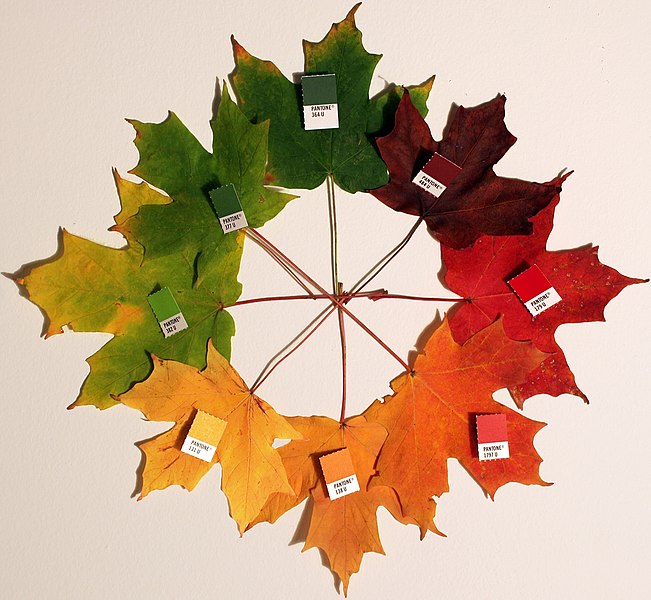 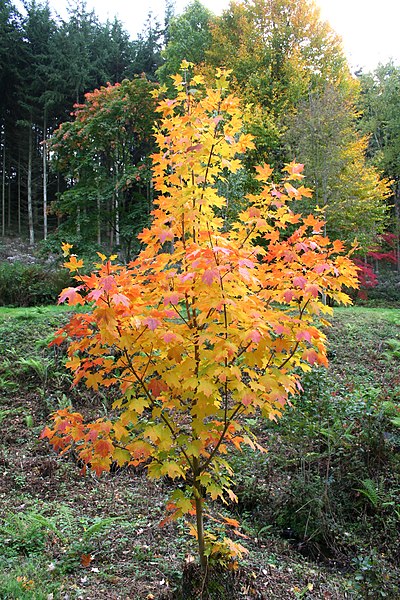 It rises from three springs in the southeastern corner of Herndon, half a mile from the US Geological Survey headquarters; this is called the Smilax Branch. Smilax is the botanical name of the greenbriers found all over Virginia. The Smilax Branch runs northward, forming the border between Reston and the town of Herndon. This explains how nearby Spring Street got its name. A little way downstream from the source (i.e., north) begins several miles of parkland and trails along Sugarland Run. The portion within the town of Herndon is called Runnymede Park; outside the town in Fairfax County it's called Sugarland Run Stream Valley Park. As the stream flows through Runnymede Park, the Sugarland Run Trail, the delight of local residents, affords a lovely nature walk by its banks. The Run has basically shaped the entire east side of the town of Herndon: two highways have been routed around its springs, while Herndon Parkway and Fairfax County Parkway follow its watercourse on either side. Near where it crosses Wiehle Avenue at Fairfax County Parkway, the street Sugarland Valley Drive follows the Run for half a mile. This street ends in Sugarland Run Stream Valley Park (they like long park names in Nova). The park is shaped like a wavy X, as it also extends up two tributaries, Folly Lick Branch and Offuts Branch, that join Sugarland Run in a little knot of valleys. The park must be known only to neighborhood residents, because it's squeezed into narrow spaces between people's back yards, the valley sides that were too steep for developers to build on. From the left, Folly Lick (I'd love to know the origin of that name) joins Sugarland Run. Folly Lick rises in the north-central part of the town of Herndon, right next to the neighborhood built in a circle around the 19th-century Higgs family cemetery, which I discovered a couple years ago working for the Census. The park runs along the Run for another three miles.
As it runs alongside Dranesville Road for a short distance, another tributary joins it from the left, a creek that flows through the backyard of the Adams mosque on Sugarland Road, a presence that has been a bit controversial because of Islamophobia. The Adams Muslims have worked hard to be good neighbors, though; e.g., wading in and cleaning up the Sugarland branch flowing in back of their lot.
Then the Run crosses Route 7, Leesburg Pike, by Sugarland Plaza. From there, it flows four more miles northward, past the residential neighborhood in northern Sterling also called Sugarland Run, to pour into the Potomac in Algonkian Regional Park, a few miles above Great Falls. The mouth of Sugarland Run displays a characteristic meandering stream pattern with a bar across it: sediment carried downstream by the creek and deposited at the mouth. The Potomac's current pushed the sediment to the right, so Sugarland Run had to divert left around it. Then it built up another bar at its new mouth, until it had to divert toward the right again, and so on. The mouth of the Cuyahoga River is a famous example of this kind of river-mouth crookedness.